Kate Hackworthy is a Canadian-born, UK-based food blogger who took to her kitchen after being made redundant while on maternity leave and soon turned blogging into a full time job. 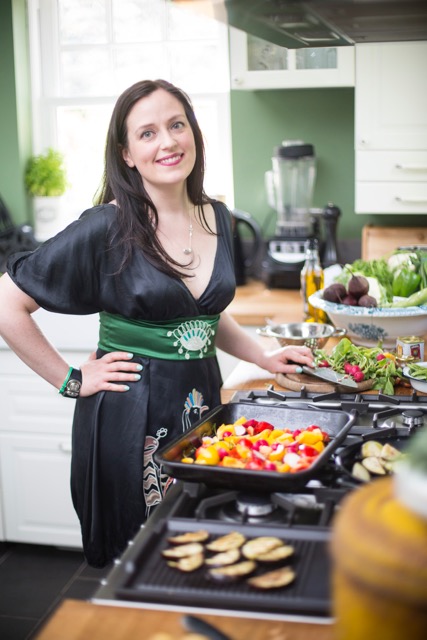 Kate Hackworthy founded her website, Veggie Desserts, as a place to share recipes for desserts created with vegetables (Hello, Kale and Apple Cake!). Her work quickly gained international press attention and a year after she started, she began winning awards. This led to a monthly national magazine column and in 2017 she released her debut cookbook, Veggie Desserts and Cakes.  The blog has since branched out to include vegetarian and vegan meals.

Kate was born in Canada and moved to the UK in her late teens. Her previous career was in marketing and project management for a media company; releasing operas, ballets and documentaries on DVD. She also co-authored a travel book about London, wrote freelance bar and restaurant reviews for magazines and lived in a narrowboat.

Kate is a mum to two small children.  She tries to give them healthy, fresh food. Her love of vegetable desserts started with the cake she made for her son’s first birthday. It was to be his first taste of chocolate, and although she wasn’t going to begrudge him that, she wanted it to be a bit better for him. After a few trials, his birthday vegetable cake was ready: one layer of chocolate beetroot and one layer of chocolate butternut squash. It wasn’t exactly healthy, but it was a big step up from a shop-bought cake.

Since then, she’s had ups (parsnip and lavender cupcakes) and downs (beetroot custard… shudder), but there is one certainty: no vegetables ever rot in her fridge.  If they don’t make it to the main course, they will make it to dessert.  Kate buys organic and local as often as she can.  She’d to grow more of her own beloved vegetables but her attempts have been rather poor so far: she spends a lot of time growing slug buffets.

Today Kate lives in a house on land in Somerset where most mornings she scrapes weetabix off the floor.  Oh!  And she bakes, bakes, bakes all sorts of vegetable cake.  While her little ones play, Kate clatters about the kitchen divining new concoctions.

What did you do before you started food blogging?
What did you go to school for?
Is your whole family back in Canada?
How long were you in Canada?
You obviously like the UK but if you were to pick your favorite place to live, where would it be?
Why did you start blogging?
Baking with kale, does it give that cake that taste?
How long did it take you to figure out the name of your blog?
When you first started, how many times a week did you publish a post?
How many drafts do you have waiting to go?
Was it once a week?
Is the schedule like that today?
Do you have anybody that helps you with your company?
How long does it take you a day to do the social sharing?
Can you talk about being hacked? What did they do with your blog?
How long did it take for you to start making money?
Did they reach out to you for the column?
How many iterations of the website have you had?
What do you think is the hardest thing about blogging?
Did you know anything about SEO when you started?
How are you learning?
What is your favorite social media platform and why?
Do you have any tools that you use for your social media?
What do you find is the easiest thing about blogging?
Can you give me a ballpark figure of how many items are on your list?
What is your most popular post?
What about post hack? What is your biggest food failure?
What is your favorite cuisine?
What is one thing you can’t live without in your kitchen?
What is your favorite cookbook?
Did you have a viral moment?
It’s your last meal, what would you eat?
What about a last cake?